Want to know the key to blogging when you have two toddlers? Caffeine at dinner.

I started this blog for 2 reasons…

2) So I wouldn’t forget where we’ve come from…

Why? Because I blog at midnight and take 90% of my pictures with my phone and they are typically with the help of either one or two little kids in my lap trying to “help” haha…

I will still plunge ahead with this endeavor however… You’ll just have to bear with me I’m afraid… with my untimely posts and poor quality photos…. but hey – at least I’m getting there 🙂

ANYWAY… Where have we been since Boston?

We flew back to Michigan (best flight EVER btw… we all slept the whole 2+ hours) and hit the ground running for Christmas!

We had family from out of town who were able to extend their stay for a week which was such a HUGE blessing to see them. Our girls are two months apart and just so fun to see them get to know each other better as they are growing. 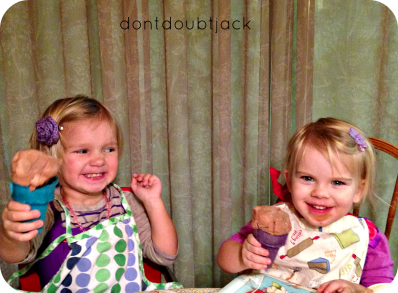 Although we didn’t get a christmas tree this year we were so blessed to be surrounded by family for the holidays and were once again amazed by the reason for Christmas in the first place… God’s ultimate generosity. His outpouring gracious love in having Jesus come as a baby. Becoming the perfect one to rectify man to God. Having a kid like Jack will make you marvel at the complexity of the human body and how God became man in Jesus… the complexity of everything that is in front of us in this life…. and though it is always going to be just out of our reach… faith makes Christmas possible. Faith makes this whole thing with Jack a joy and not duty. 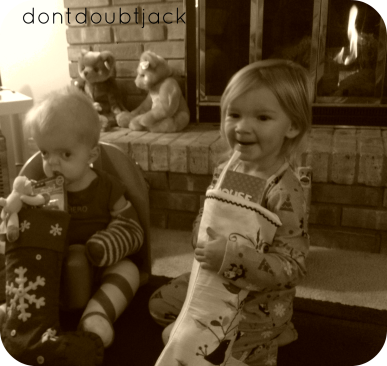 Stockings are big in my family 🙂 So even without a tree…. stockings are a non-negotiable.

Jack didn’t let a few casts stop him either… please note him chewing the cardboard. It truly is amazing how he has taken this whole cast thing in stride. It was definitely harder this time around. He was heavier… he wanted to do stuff with his hands that he couldn’t. And by the end you could just tell he was over them. I think the first time I thought it was going to be terrible – so it was better… but this time it was better in the other sense- that it wasn’t our first time!  We knew that clothes were optional at home. and pants/shorts were just plain silly…. So onsies and tank tops were his wardrobe. We did buy a few sweater vests which he rocked though 🙂

Two days after Christmas we hosted a benefit concert and booksale/silent auction at a local beach venue. We were stunned at how well it came together despite our absence for the month of december And the success was based so much on our amazing church and families. Words just cannot express how much it meant to us that people were willing to help us put this event on. The food, the music, the art, the books, the coffee… it was a crew!  I was on my feet for two solid days and woke up on sunday unable to walk BUT IT WAS WORTH IT!

We had anticipated making about 1-2 thousand dollars and were FLOORED when we rang the total in at $6750!  Yes. I cried. A lot. It was really humbling to see people come from all areas of our lives. The beach was so beautiful… the music was so good – we may just have to do this again sometime. 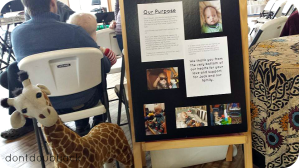 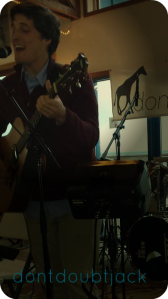 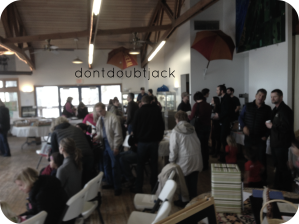 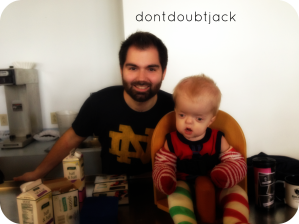 Because you see… it’s a marathon with Jack. So numbers aside… it was remarkable to me to see that people are reaching out to Jack’s story. I feel like I read somewhere that people with Apert have 30-50 surgeries in their lives.

We have 5 under our belt.

It took my breath away when I realized that the other day. I focus so much on living day to day. Not worrying about tomorrow… that to look back and let it soak in that we lived through 5 surgeries. 5 trips to Boston and back. Three moves. 1 career change. 1 trip to Europe… THIS YEAR. So many days and weeks of Jack either being sick, preparing for surgery, or recovering from surgery… it is truly a miracle that Jack is as happy as he is.

That was an important lesson for me in taking care of Jack. After his skull surgery I wasn’t sure if the grumpy Jack was the new Jack or if he was sick… turns out that grumpy Jack is a problem… a real problem.  So please pray for me to determine when grumpiness is a symptom of being human or being hydrocephalic…. it’s my biggest fear right now as we move through the first month of healing. See, the doc said that if the procedure was going to fail… it would be in the first 6 months. Which basically translates to: hold your breath…. your about to live the longest 6 months of your life…

We got the casts removed the 30th. It was pretty traumatic to be honest. I couldn’t watch by the end. It felt like torture… until it was done and Jack looked at his hands. Amazement was written all over his face…. he moved his wrist. first one, than two. that moment I could relive again 🙂 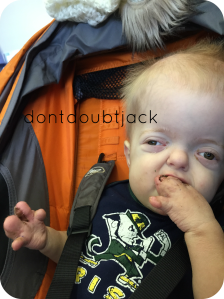 Since then we are fighting to keep him fed!  This kid is seriously eating all. the. time. It’s like a light turned on and now he thinks he has to eat as much as possible just in case the light goes out again.

It’s so fun to have a kid again. Playing, eating, doing all the things babies do. except move. He just yells at us when we walk away. That light hasn’t turned on yet. He doesn’t seem to have much desire to use his legs and arms. We start therapy again next week so I’m excited about that… a little nervous too. I wish some of this stuff was faster than it is. I’ve been trying to remember James 1 though where it says

2 Consider it pure joy, my brothers and sisters,[a] whenever you face trials of many kinds,3 because you know that the testing of your faith produces perseverance. 4 Let perseverance finish its work so that you may be mature and complete, not lacking anything. 5

I don’t want to short change my perserveance. I want to enjoy every ounce of life. the good, the bad, and the ugly. Not in a self indulgant kind of enjoy… (unless it involves coffee and/or reeses). but in the way that I am here in this time of eternity for a reason with these gifts and these challenges and I want to embrace them. let them shape me and grow through them.

Which brings us to 2015… We had a quiet new years which I think we all desperately needed. We are really looking forward to settling in more in our new home. Which is actually starting to feel like home…

My window now has two verses on it by my sink. One is Matthew 6:33 and the other is psalm 37. Two phrases I hope characterize 2014 into 2015: “befriend faithfulness” and “seek first the kingdom of God” Both chapters are well worth the read.

So with that I think this chapter is ending…

I heard somewhere that the first two years with Apert is the craziest… If thats true than we’re over halfway through… If not… it’ll be a long ride…. one day at a time with a few stops like these to remember the jouney.

does the soul good. 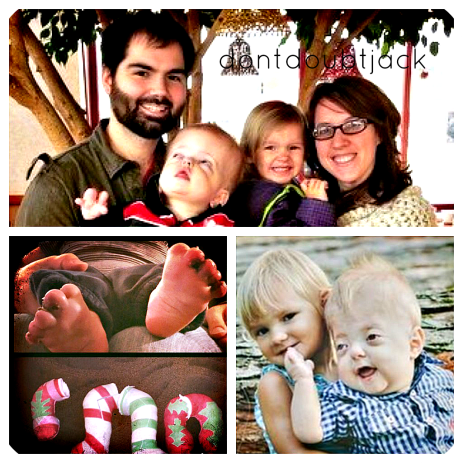